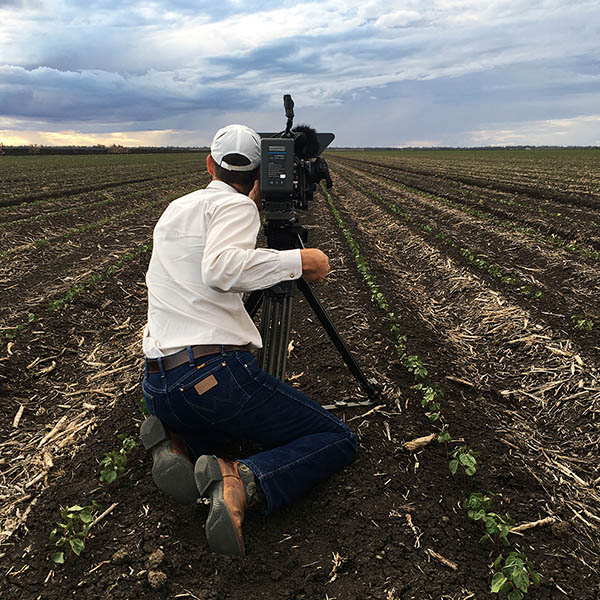 At Palatine Productions, we love a broad canvas, and they don’t get much broader than the Australian cotton industry!

We were absolutely thrilled when the Australian Cotton Shippers Association (ACSA) contacted us after the success of our micro documentary “Back to Nature“ which opened the Natural Fibre Fashion Shows daily at EKKA 2017.

ACSA represent Australian growers in the international market place and they needed a powerful marketing tool that would capture the scale and grandeur of the Australian Cotton industry.

We jumped at the opportunity to delve into another amazing Australian rural industry and find all the best people, places and practices to point our lenses at.

Cotton is a lovely story of families of many generations and huge agri-businesses, all of whom work very hard to produce some of the worlds best cotton.

After settling on a list of who, when and where with Chairman Cliff White and the amazing Tracey Byrne-Morrison from ACSA, we headed off to our first location, “Territ” in Dalby Qld with McVeigh Partnership. 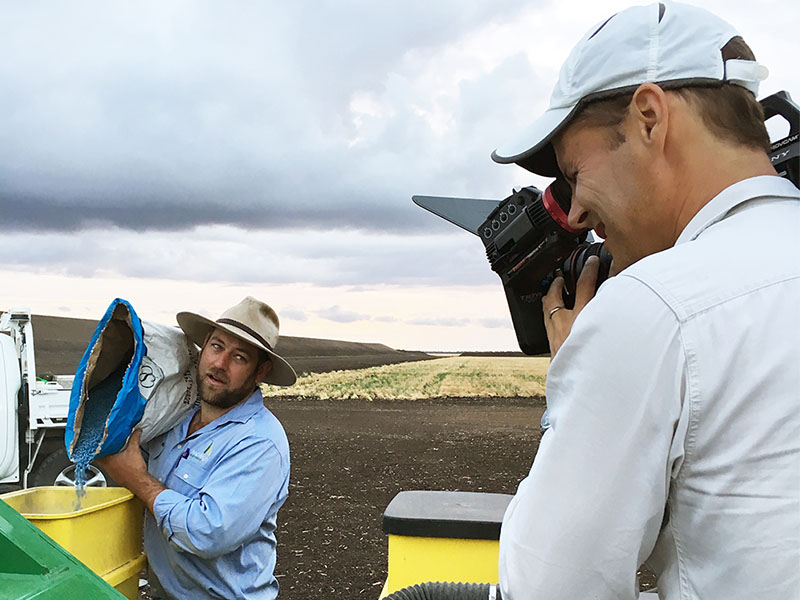 Matt McVeigh and his family run several farms, and Matt couldn’t have been more friendly or helpful. The opening shot of the pretty blue seeds tumbling into the seeder was high on the wish list for us and ACSA. Matt lugged the heavy bag a few times to get the shot right before we headed into the fields, where seedlings had just emerged from the ground. 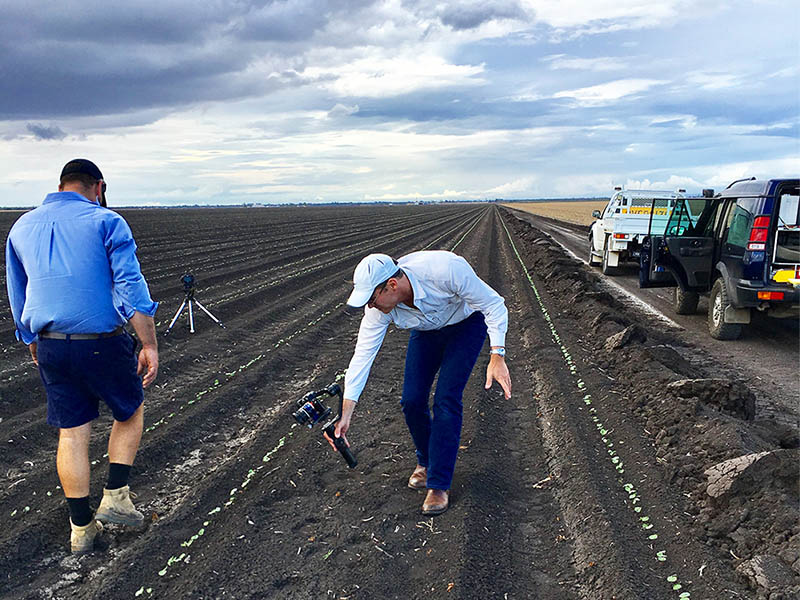 We shot footage of these tender little green shoots with Matt inspecting them and rolled off a few amazing time lapse shots of huge storms lurching in overhead. Normally camera crews despair at the sight of rain but when you are working with farmers, any rain is a blessing. The shots of the storms brewing in the distance are also beautifully moody.

Nest stop in Dalby, the Olam/Qld Cotton Ginnery. When you are ginning and storing thousands of tonnes of cotton, you need massive storage, we already had the Ginnery material, so we found ourselves standing inside a huge cotton warehouse. One thing we love about our work is how you see things not normally on show to the public. Wandering amongst the rows of cotton bales was fascinating, and so great to shoot a raw material in this state, ready to be trucked out for shipping to the world. 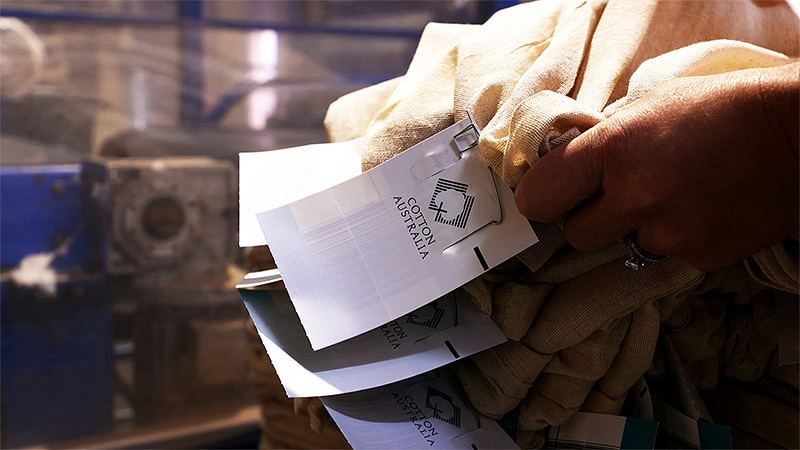 Something about how cotton bales look, it really felt like days of old, except there were laser bar Code readers, state of the art computer tracking and bale grabber trucks. All of which show how Australia is on the forefront of the world’s cotton industry while still cultivating an earthy and deeply loved product.

The rest of our time in Dalby was spent in the cotton fields…. getting some epic shots of cotton in various stages of growth. We were throwing some gear at it too, gimbals, drones, dollys, and all while dodging the life giving storms and trying not to step on the very precious young plants.

From Dalby we waited for the crops to mature over Christmas then when the timing was right, headed south west to Goondiwindi in late January. Despite filming in nearly 40 degree heat, Goondi is the most gorgeous Qld town in the heartland of Australia. 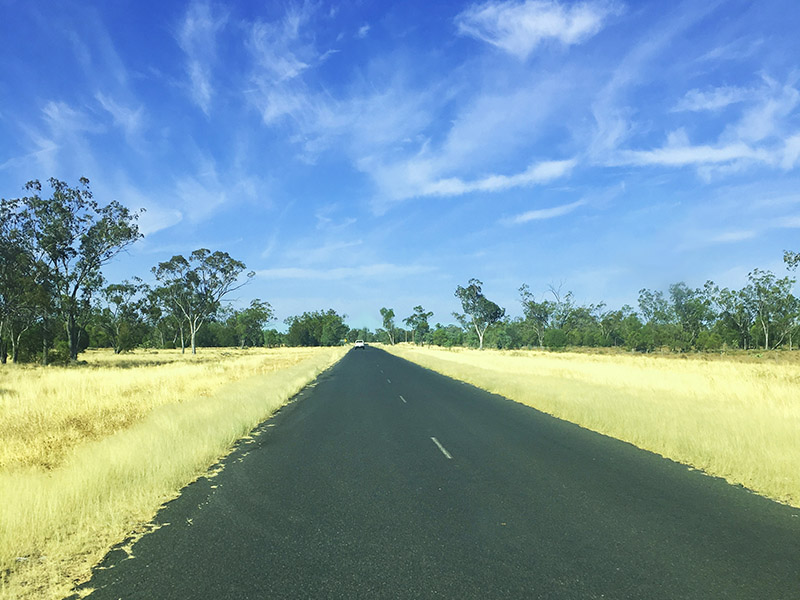 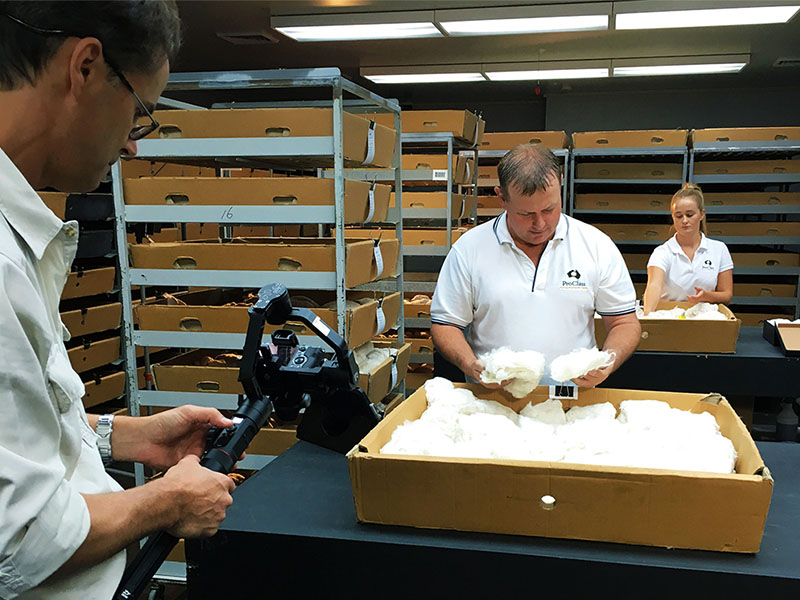 First stop, a visit to the “ultra high tech” world of ProClass. Classing cotton is an art and a science. Jon Hurford and his team were very accommodating, even after the mild surprise at how much equipment kept unfolding from the road cases. There was a lot of setting up involved to capture these processes and the patient ProClass staff took it all in their stride. This truly is a rare glimpse behind the scenes at a section of the industry not often on show to outside eyes. 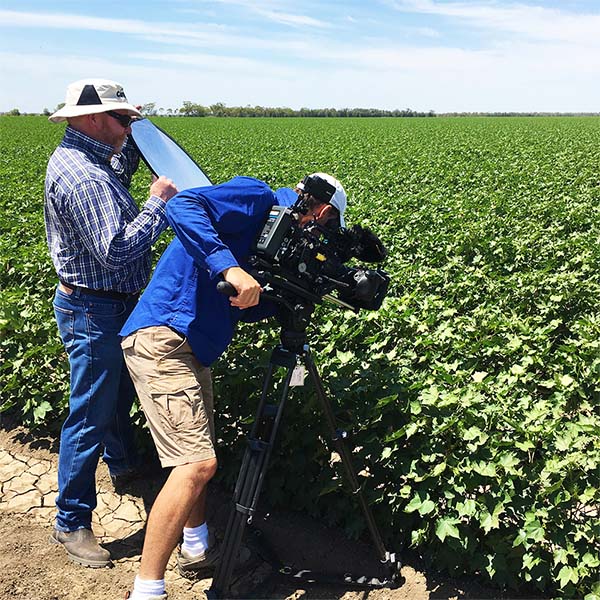 From Proclass it was time to see what Goondiwindi had on offer out in the cotton fields. Luckily, along to help was our awesome newly recruited assistant and ACSA location fixer, Phil Sloan.

We knew cotton was a crop that required big thinkers but we were even more taken aback after a short tour of  ”Mundine” with Simon Corish of Corish Farms Australia. 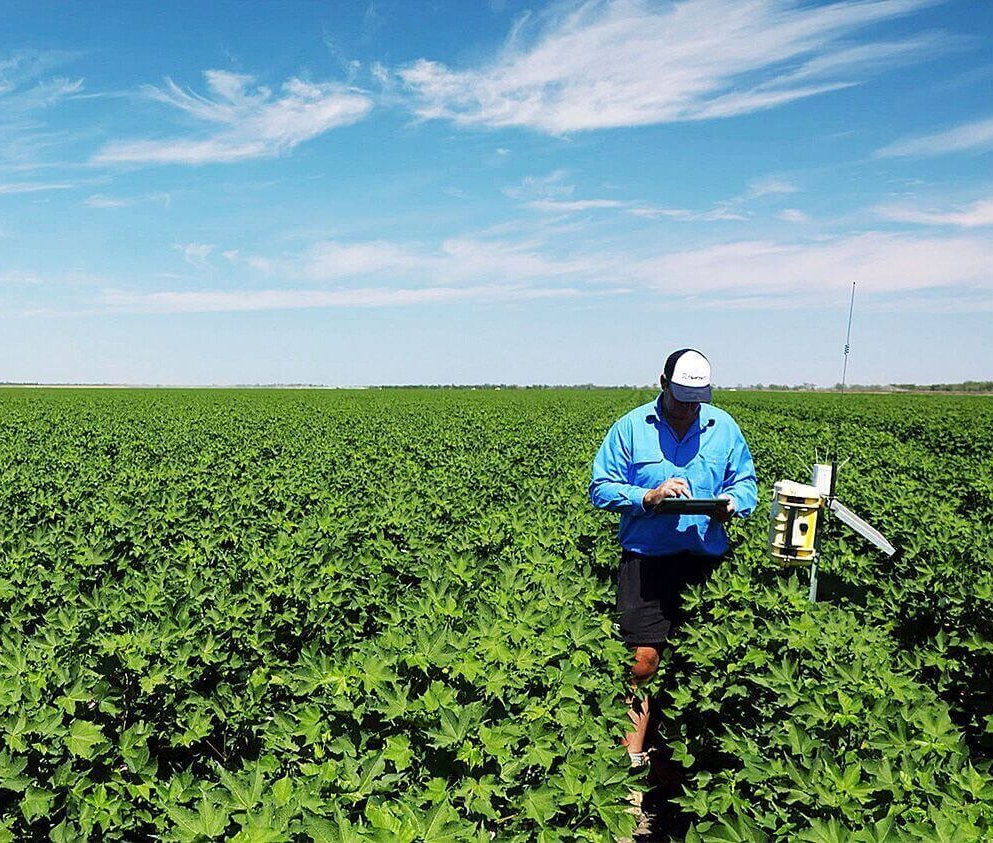 A civilisation unto itself, the systems of dams, roads, earth works, irrigation channels and of course row upon row of healthy and beautiful cotton plants were jaw dropping and yet strangely serene. The plants were their own special kind of green and we arrived just in time to watch the irrigation flooding of a field. There was an epic feel to the small wall of water slowly making its way along the laser levelled water channels to the final destination of the rows of cotton plants. 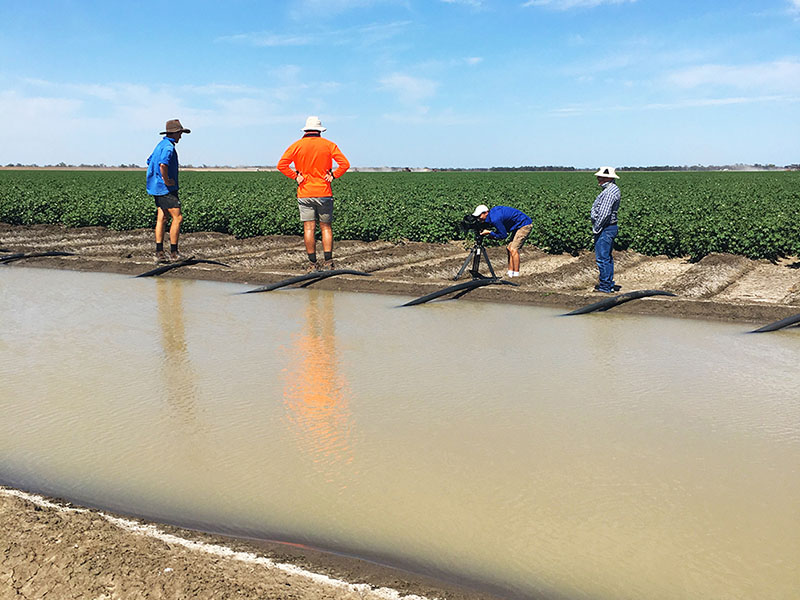 The drone got a good work out here, clocking up many flying hours trying to grab a sense of the symmetry that is intrinsic to cotton farming. Sharen also worked on her four wheel driving skills navigating the road systems tight turns, while dodging the channels full of swirling irrigation water with mere  inches to spare. 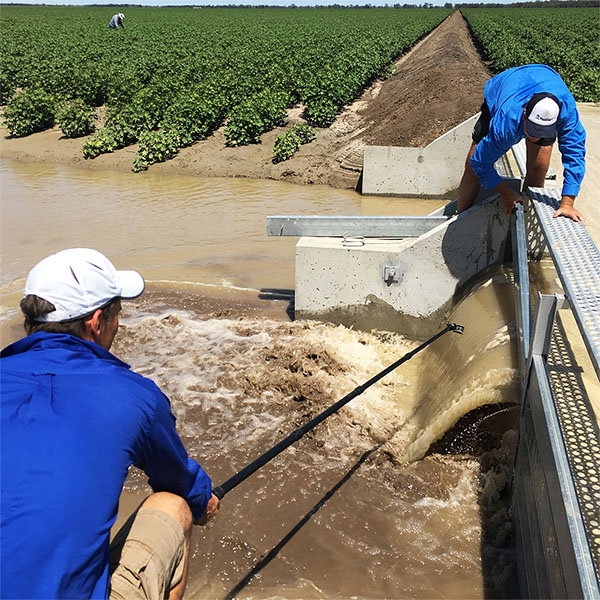 Next – Harvesting! We had earlier filmed in Dalby with husband and wife team Mick and Sam Simmich of Simmich Farming when their cotton harvest was at its peak where we were genuinely in awe of magnitude of the Simmich Farming venture. Watching the amazing harvester picking its way through fields of fluffy white and frequently dropping a “Module” out the back without stopping was once more a moment to stop and be awed. 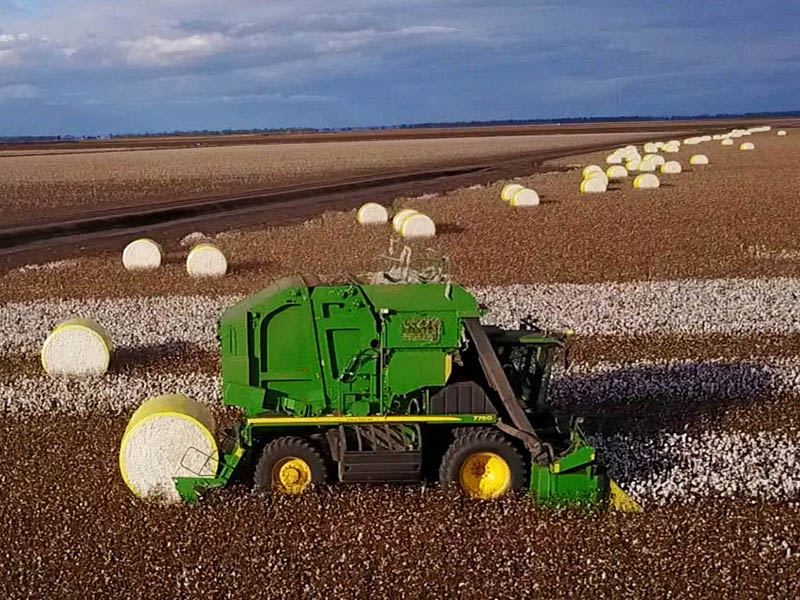 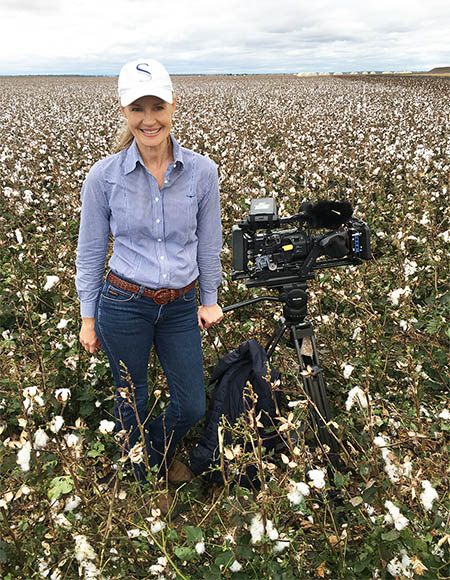 Happy days for producer Sharen Kenny to be able to work in such an epic landscape while filming harvesting at Simmich Farming. 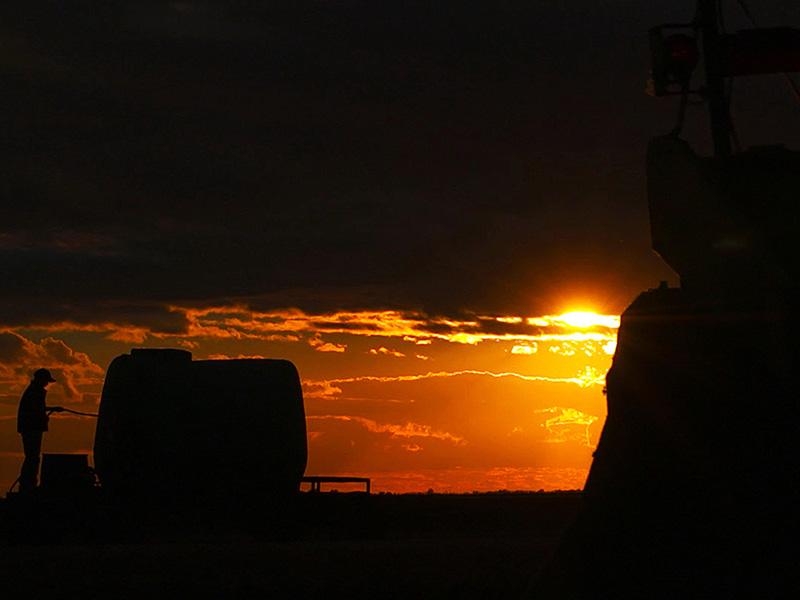 Even fueling a harvester looks amazing on the Queensland downs country as the sun sets on Simmich Farming.

Next location was back in Brisbane and something really out of the box. The final step in Australia for our cotton export is the ports, and we were lucky enough to get access to Patrick Terminals, Port of Brisbane. 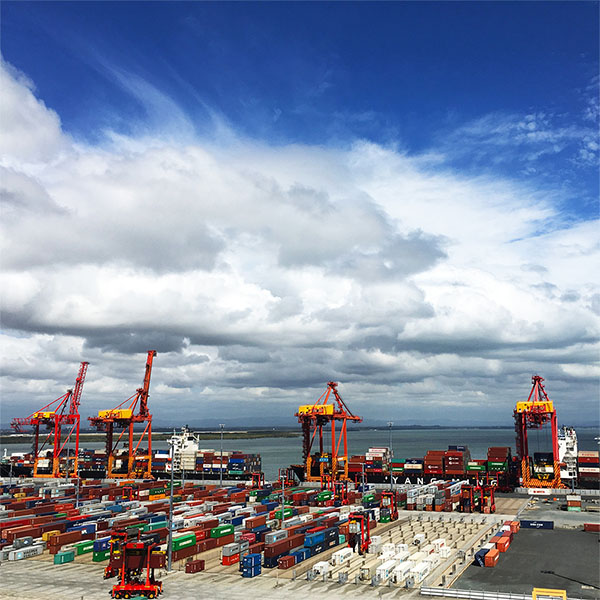 You need a few minutes to take it all in. The enormous scale of the facility, the 40 tonne robot straddle cranes moving about on their own, the huge container cranes loading the ship with thousands of containers… the constant movement of trucks and freight. 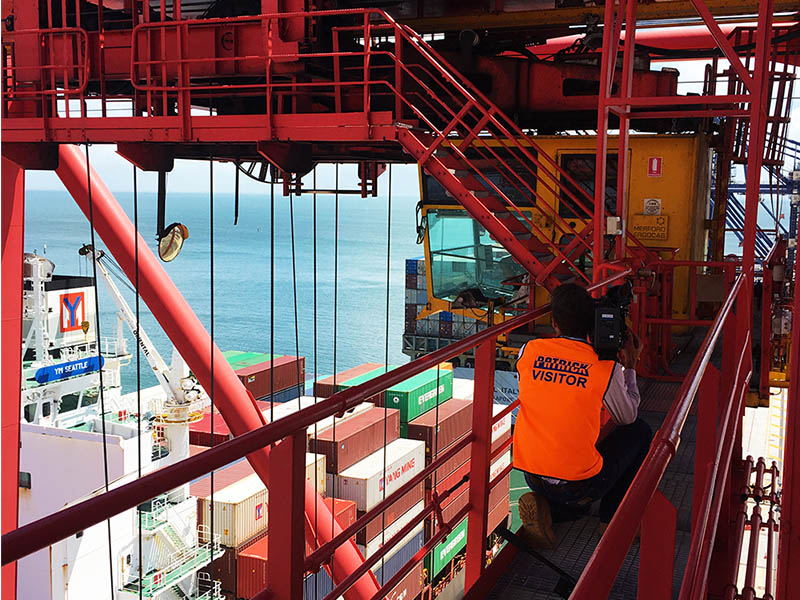 Operations manager Matt Hollamby arranged an all access tour led by Stevedore Matt Ireland. In Matt Ireland’s care we were chaperoned throughout the entire complex, including a trip to the upper decks of the Container crane. Over 60 metres above the deep green waters of Port Of Brisbane. It was safe, but it moved in the breeze and was loading heavy shipping containers, and standing on the narrow walkways way up in the sky was something “different”. 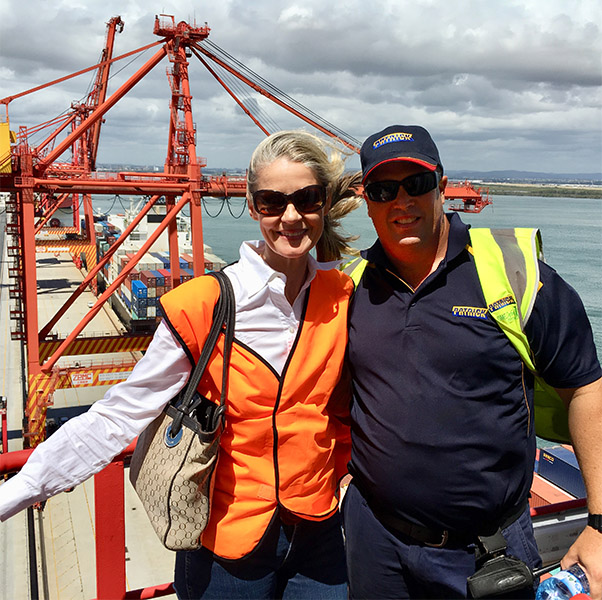 We left on a high and can’t speak highly enough of the extremely professional staff at Patricks who helped us to get what we needed.

Upon our return to Palatine HQ it was time to sit down and begin the huge task of post-production – We had so much awesome material we could have made about five films.

We also had to choose a piece of music that could carry a story like this. After many hours scouring the library we settled on a track that we had actually found in first ten minutes!

The edit went extremely well, blending all the elements together in a way that held a soft but driven narrative and making the most of the impressive visuals we were able to shoot.

In early March 2018, ACSA Board Members premiered the film in Turkey at an export market development meeting and the response was immediate and overwhelmingly positive.

There have been several requests to use the film by other organisations in the cotton industry, all of whom recognise how well the production hit the mark of showing our industry in a fresh and majestic light.

The Australian Cotton Shippers Association now have the video in pride of place at the top of their Home Page.

To be honest we are a little sad it’s over. The adventure of our cotton trips and the incredible people we met, their hospitality, vitality and brilliance made it one to remember.

After four months and a lot of hard work, we couldn’t be happier with the final product. 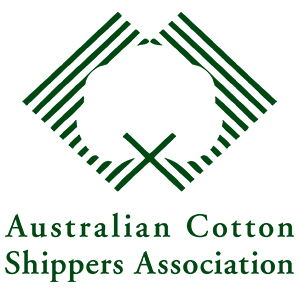